Home > News > Should you buy Cardano (ADA) after the AGIX ERC-20 converter launch?

Cardano is a proof-of-stake (PoS) blockchain platform which was founded on peer-reviewed research, and conducted its development process through evidence-based methods.

ADA is the native cryptocurrency token that powers the Cardano blockchain platform.

The AGIX ERC-20 converter launch as a catalyst for growth

We’ve seen huge growth of the Cardano ecosystem, with Cardano-based DEX and AMM DOEX launching a public sale on Kick.io, as well as SundaeSwap DEX on Cardano launching their public testnet.

According to an official announcement posted by Input Output on December 7, its AGIX ERC-20 converter was launched in their testnet.

What this means is that users now have the opportunity to convert their ERC-20 tokens to the new format, where they would be transferred to EMURGO’s Yoroi or Input Output’s Deadulus.

SingularityNET will be the blockchain-powered artificial intelligence (AI) marketplace which was created to enable a seamless way to monetize various AI-related services.

The utility token was initially launched on the Ethereum blockchain, and went under the ticker symbol AGI. In May of this year however, it was revamped to Cardano-compatible AGIX.

In this initial testnet version, users can move the SingularityNET’s AGIX tokens to Cardano, and back to Ethereum through a permissionless bridge.

This marks a huge step forward when it comes to driving the interoperability between blockchains, with the goal of enabling a functional environment for decentralized finance (DeFi).

All of this contributes to the growth of the Cardano blockchain, and as such, the value of the ADA token.

Should you buy Cardano (ADA)? 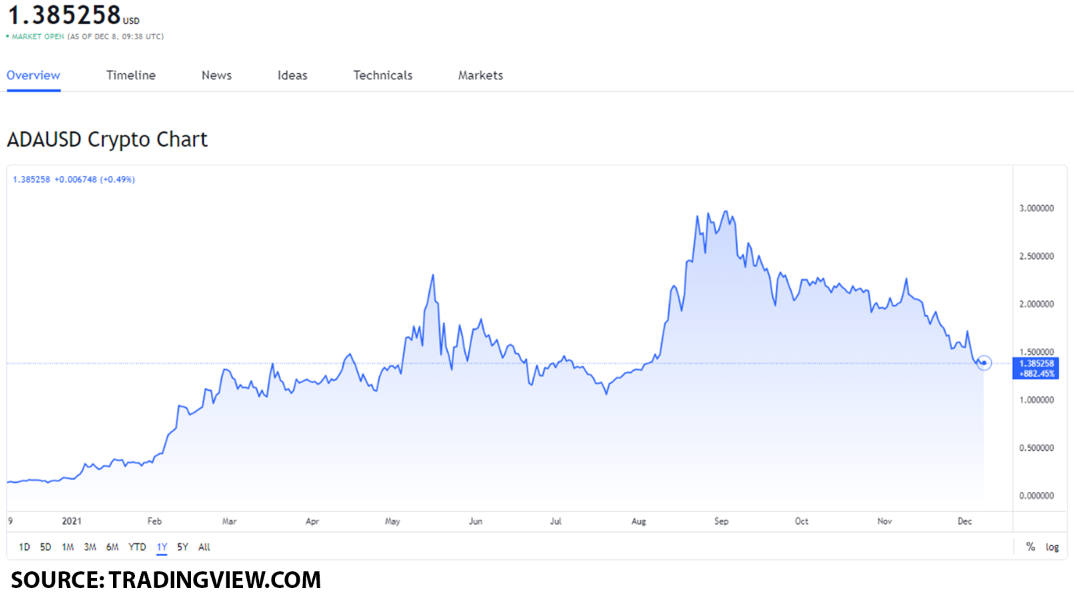 To see what this value point indicates when it comes to the growth of the token, we will go over the performance of the ADA token throughout November, and compare these values to it's all-time high value point.

The all-time high value point of the ADA token occurred on September 2, when it reached a value of $3.09.

This gives us a perspective on how the value has shifted, where we can see that the token was $1.71 higher in value or by 123% at its ATH value point.

Looking at November however, we can see that on November 9, the token had its highest point of value at $2.33.

However, this marks a solid opportunity towards buying the ADA token, as it can reach $1.7 by the end of December.

With the AGIX ERC-20 converter launch, and overall SingularityNET availability, the interest in the Cardano ecosystem, and the value of ADA will increase.