Home > News > Should you buy BTC after Ukraine made cryptocurrencies legal?

Due to the fact that Bitcoin (BTC) is the largest and most popular cryptocurrency token, it has the highest level of interest.

Bitcoin’s market cap essentially shapes the entire industry, and it is excellent to see that the token still remains above the $40,000 price range.

Ukraine’s legalization of crypto as a catalyst for growth

Ukraine has been using many digital asset donations as a means of supporting the country's defense against the Russian invasion.

In fact, the President of Ukraine, Volodymyr Zelenskyy, has enacted a law officially making cryptocurrencies legal in Ukraine.

According to this law, any foreign and Ukrainian crypto exchange can operate legally in Ukraine.

This news came on March 16, 2022, when the Ministry of Digital Transformation of Ukraine posted a statement on Twitter and their official website.

The draft “On Virtual Assets” law was first passed in a near-unanimous vote within Ukraine’s parliament in September of 2021.

Afterward, Zelenskyy vetoed the bill in October, where he argued that the costs of establishing this new regulatory body to oversee cryptocurrencies were too steep.

However, this newly signed bill was an amended one that addressed his concerns and was backed by a majority in the Verkhovna Rada, which is the Ukrainian Parliament, in a new vote on February 17. 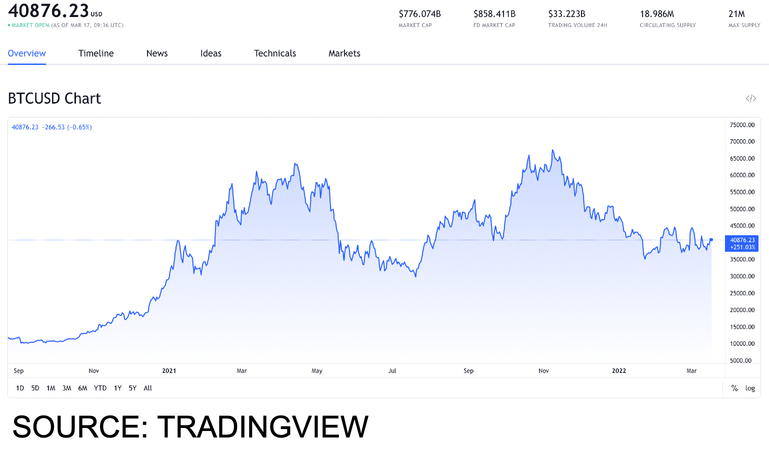 In order for us to get a better perspective as to what kind of value point this is for the BTC cryptocurrency token, we will be going over its all-time high point of value as well as its performance throughout the previous month.

When we go over the performance of the token throughout the previous month, Bitcoin (BTC) had its highest point of value on February 10 at $45,387.26.